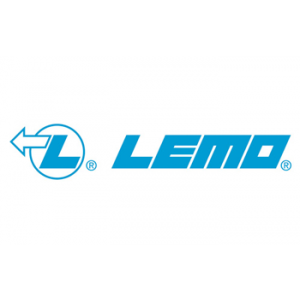 LEMO is both the name of an electronic and Fiber optic connector manufacturer and the name commonly used to refer to push-pull connectors made by that company. LEMO is based in Écublens, Switzerland. LEMO connectors are used in medical, industrial, audio/visual, telecommunications, military, scientific research and measurement applications. The company, founded in 1946, started as a manufacturer of contacts in noble and rare metals. The company’s name was derived from name of the company founder (engineer) Léon Mouttet.

LEMO manufactures highly specialized connectors for very demanding applications, e.g, the LEMO miniature push-pull 50 Ω coaxial connector that is used as front panel connectors in the Nuclear Instrumentation Module (NIM) and Computer Automated Measurement and control (CAMAC) modular electronics standards used in instrumentation for nuclear and particle physics—where it is used as a replacement for BNC connectors in high density designs (because the LEMO connector is much smaller in size than a BNC).

In July 2014, LEMO acquired Northwire Inc., a US specialty cable manufacturer of wire and multi-conductor cable and retractile for the medical, aerospace and defense, energy, and industrial markets. The acquisition of Northwire, headquartered in Wisconsin, allows LEMO to provide a complete cable-connector solution.

LEMO maintains two facilities in Japan (Tokyo and Osaka), another one in Singapore and two in the USA. As well as offices in Vienna and Budapest.

In 1994, LEMO entered into Chinese market through a distributor. In 2004 LEMO set up a subsidiary company in Shanghai and build a large manufacturing and assembly facility. LEMO China now employs more than 130 people in this facility. Besides Shanghai, LEMO China has offices in more than 14 cities, such as Beijing, Guangzhou, Shenzhen, Tianjin, Changsha, Chengdu, Wuhan, Taiyuan, Harbin, Changchun, Shenyang, Xi'an, Nanjing and Zhengzhou.

In Écublens, one of three offices in Switzerland, R&D is performed in a test laboratory with an industrial climate chamber. Organic insulators and sealants must withstand extreme cold and heat as well as other environmental demands and standards.

The AKG AV100 Aviation Headset uses a 6-pin LEMO connector. Until 2013, when AKG moved from number 21–25, and LEMO Elektronik, GmbH, situated on no. 49/E6-3, the two companies were somewhat neighbors in Lemböckgasse, Vienna.

The LEMO Fiber Optic team offers an expertise for Fiber optic cable assembly. LEMO continues to invest in resources in Fiber optic systems and assemblies—and they have unique skills, especially in termination of hybrid electro-optic connectors.